A portion of the ancient Avalonia Shield on the Sheep Farm North features six high rocky ledges and many smaller ones, ridge lines, south-facing cliffs, and outcroppings. Glacial activity is apparent on the scarred rock faces and in the form of large erratic boulders.

Colonial stonewalls and stone heaps still mark the boundaries found on a 1754 deed.

“The Sheep Farm North vernal pools are unique in that the amphibians breed abundantly in streamside pools filled by flood waters. This reach of Fort Hill Brook maybe fish free …because both the highway and the waterfall are fish barriers.” Sigrun Gadwa, biologist, and soil scientist. – There are two unique stone vernal pools. The entire site provides upland habitat, critical to the survival of the vernal pool species from both sides of the property boundaries.

field, forest and wetland habitat, 75 species of birds known in the area

This historic 63-acre property is located at the top of Hazelnut Hill Road in Groton.

Acquired in December of 2010, this project was funded by member donations, community clubs, local organizations, businesses, local and national foundations, and grants from the CT DEEP Open Space and Watershed Land Acquisition Program, the Long Island Sound Futures Fund, and a bridge loan from the Conservation Fund.

This property had been in continuous use as a farm since the 18th century and well into the 1990’s. The Groton Town owned Jabez Smith House Museum nearby on Route 117 and the Sheep Farm North were once part of the same property. Samuel Edgecomb, Jr., purchased the land and the active grist mill in the 1750’s. Many of the early 18th-century farm features are well preserved including a grist mill dam, the mills’ water control foundation, a second mill site, and water controlled channel through a narrow rock gorge. The activities of an early owner, Samuel Edgecomb, are mentioned frequently in the historic Hempstead Diaries.

A 34 lot subdivision had been approved for the property. GOSA had collaborated with the project engineers to design a forest-preserve style residential neighborhood, which would reduce the impact of stormwater run-off to Fort Hill Brook. The extensive ledge made the project too expensive and GOSA offered to purchase the property to protect it from future development.

GOSA was awarded a CT DEEP Grant to help purchase the property. As a requirement for receiving the state grant, environmental testing was performed and permits were obtained to demolish two houses, a barn, five other farm structures, mitigate for lead and asbestos, and remove three fuel tanks. In order to finance the purchase of the property prior to receiving the CT DEEP Grant, the Conservation Fund provided a 90-day loan. In spite of five snow storms, which delayed permitting and mitigation activities, GOSA completed the project on time.

In 2011, GOSA received the Excellence in Land Conservation Award: Outstanding Land Acquisition Effort, from the Connecticut Land Conservation Council for the “…protection and restoration efforts of the historic Sheep Farm in Groton, CT.”

The State of CT holds a conservation easement on the 63-acre property. 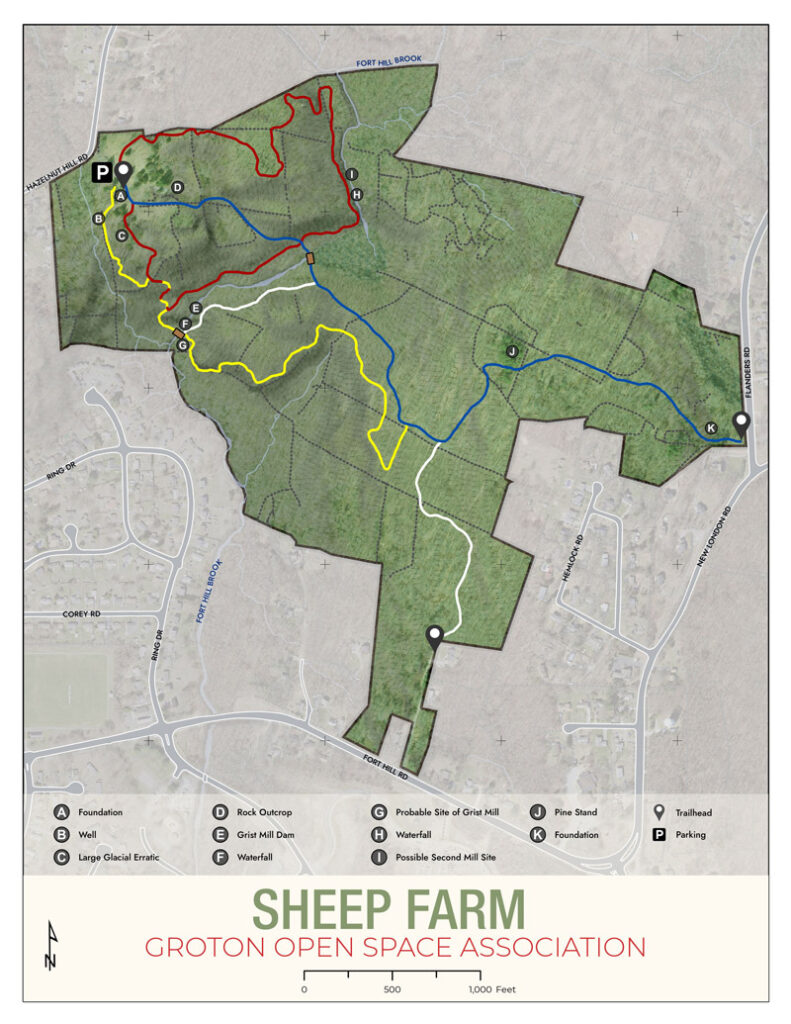 Rt 95 exit #88, Hazelnut Hill Rd up past Pequot Clinic. Contact us at [email protected] for tours or directions.