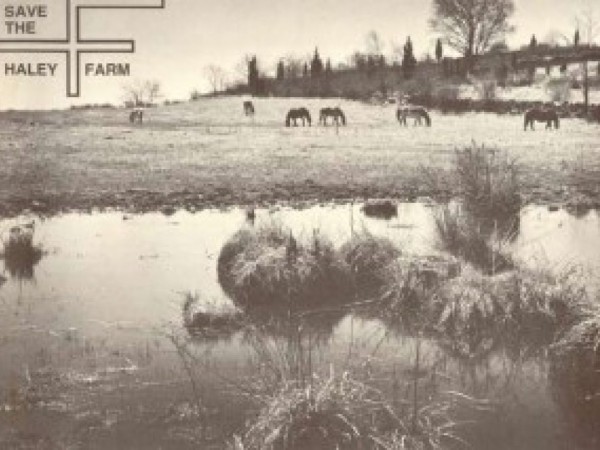 In 1967, before Groton Open Space Association existed, a group of concerned citizens first organized to protect Haley Farm and called their fledgling advocacy group the “Save the Haley Farm Committee.” With the help of the CT Forest & Park Association, GOSA raised the matching funds needed to purchase  200 acres of the farm that became Haley Farm State Park in July of 1970.  GOSA’s role in saving Haley Farm was featured in Life Magazine’s July 1970 issue, under the title “Battles Won.” But the battle wasn’t over… yet. Thirty-two years of steadfast GOSA advocacy later, the abutting upper 57 acres were finally added to the park in 2002. Funding from the Recreation and Natural Heritage Trust Program  (established in 1986 by the Connecticut General Assembly to expand the state’s system of parks, forests, wildlife, and other natural open spaces) made the purchase possible.

GOSA remains actively involved in Haley Farm State Park stewardship to this day by hosting an annual clean-up day in April and, since 1985, sponsoring the Crowley family’s annual field mowing to prevent the park’s rare meadow habitat from reverting to woodlands. 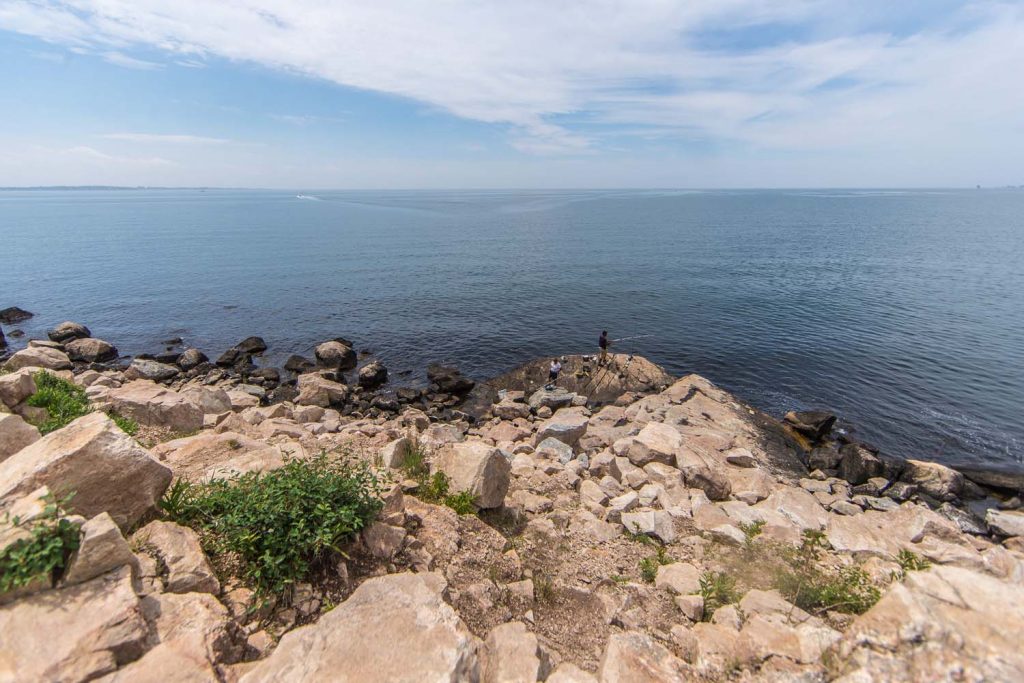 Bluff Point, like Haley Farm, also came under intense development pressure in the early 1960s. Because Bluff Point was the “last remaining significant portion of undeveloped shoreline in Connecticut” whose “rocky bluffs… typified the Connecticut coast,” the Connecticut General Assembly set up the Bluff Point Advisory Council. In 1972 local citizen groups (including GOSA members) and government representatives were invited to serve on the council to decide on “the highest and best use” of the land. The committee successfully petitioned the state to acquire and protect the land; Bluff Point was established as a State Park and Coastal Reserve in 1975 “for the purpose of preserving its native ecological associations, unique faunal and floral characteristics, geological features and scenic qualities in a condition of undisturbed integrity.” The act assigned Bluff Point State Park the highest possible protection in the state park system. 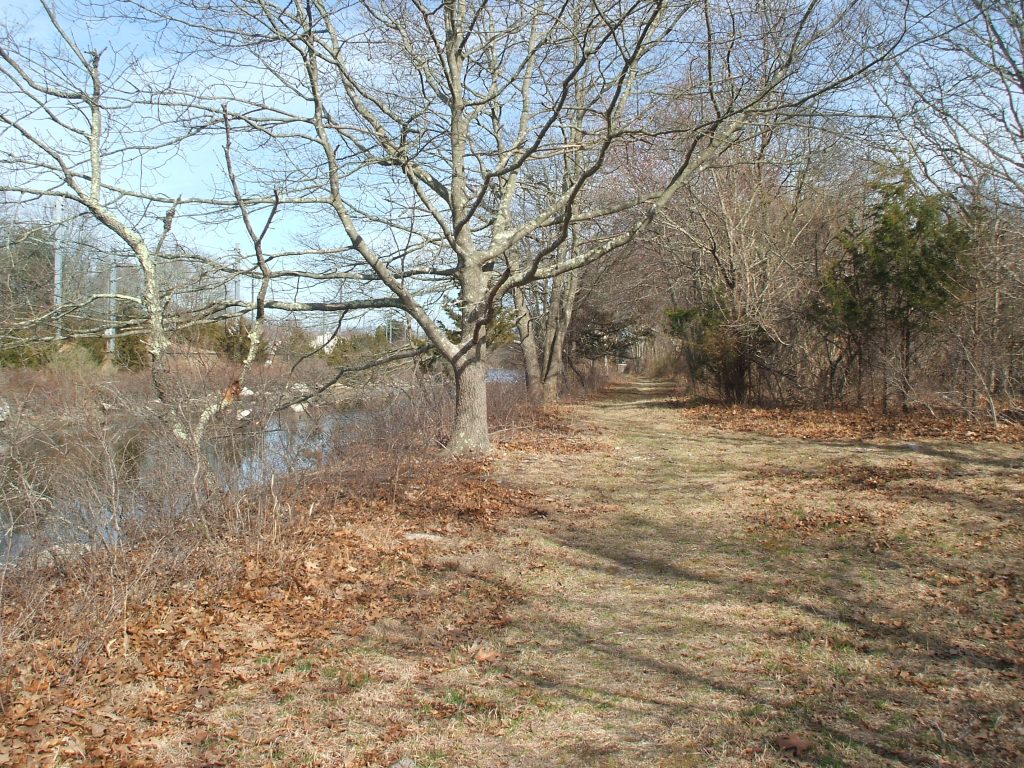 GOSA successfully petitioned the Groton Town Planning Commission to comply with the provisions of the CT Coastal Management Act of 1980. As a result,  a 100-foot conservation easement and an improved stormwater runoff system were adopted next to Palmer Cover to reduce the potential for pollutants to enter adjacent tidal wetlands, protecting water and wildlife, and guaranteeing public access to a proposed waterfront path. 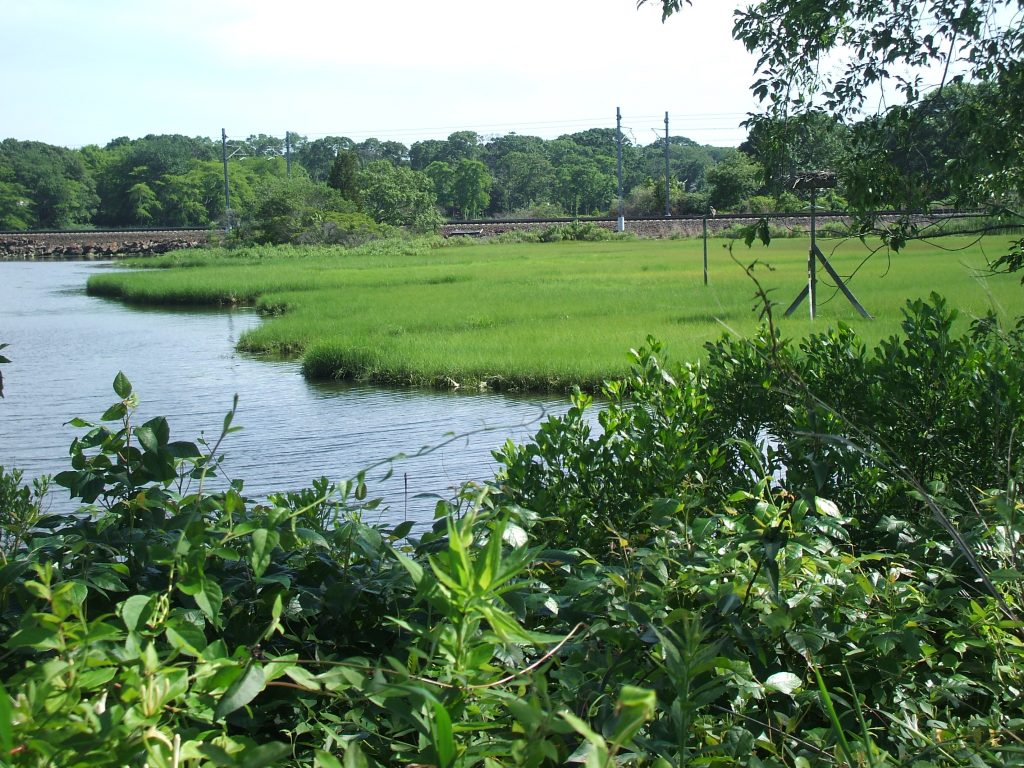 The Groton Town Council recognized GOSA for for their role in the “32-year-long struggle to add 57 acres to the Haley Farm State Park.” Priscilla Pratt, a GOSA pioneer accepting the Green Circle Award on behalf of GOSA,  shared the following pearl of wisdom about open space at the Proclamation ceremony: “There is one thing stronger than all the armies in the world, and that is an idea whose time has come.” 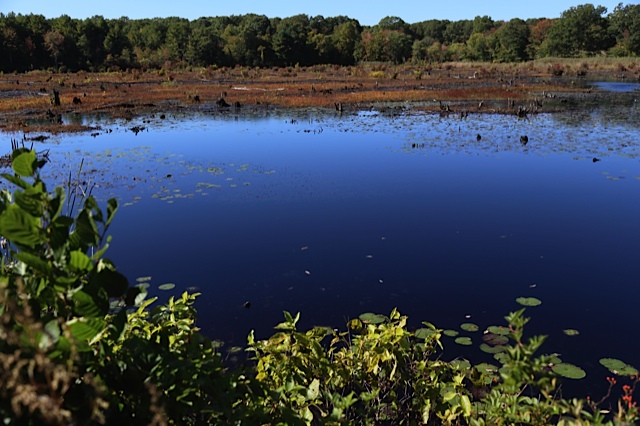 Great Brook Preserve
GOSA has advocated for best management practices for stormwater runoff and, on several occasions, has provided expert testimony during land-use proceedings and regulatory hearings.  GOSA’s efforts have helped to preserve the quality of Long Island Sound’s water, which is key to our local and regional recreational use and fishing and shell-fishing industries.

Wal-Mart Super Center
In 2006, GOSA intervened and provided engineering expertise to challenge a site-plan application for a Wal-Mart Super Center, five building lots, and parking at the site of the former Shetucket Plumbing Supply Company on Gold Star Highway. Storm water from this project would have flowed into Hempstead Brook, which is a direct conduit into the City of Groton Utilities’ terminal reservoir system 750 feet away. The original plan had not provided for any storm water treatment for the driveway, which was expected to carry 1250 cars per day.

At 2:20 a.m. on February 16, 2007, before a crowded hall, the Town of Groton Planning Commission denied the site plan approval in a 4-1 decision, citing risk to the watershed from firefighting chemicals. Commissioner Peter Roper called the project “too big, too close to the reservoir.” Konover Corp. did not have standing to appeal, and the decision was upheld.

GOSA had proposed an alternate plan, since completed, to expand the existing Wal-Mart, which is located half a mile — a safer distance — away from the reservoir. 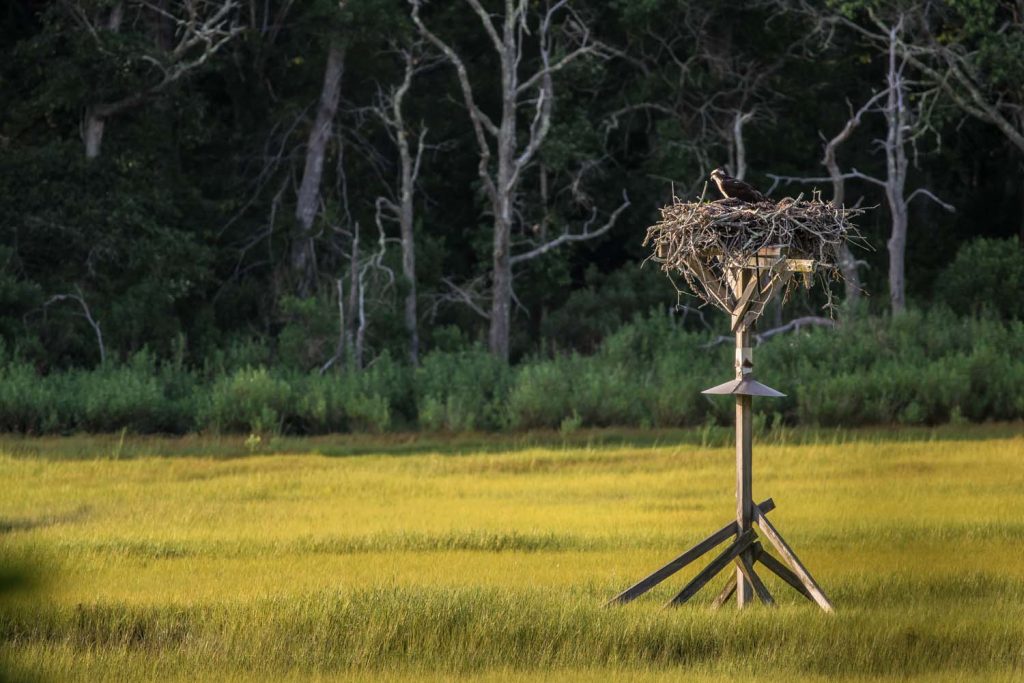 Sue Sutherland stood before the Inland Wetlands Agency on May 9, 2007, to speak about a proposed 211-unit “Mystic Woods” housing development in Groton. She stated that “It has been five years…[since] the Plan of Conservation and Development listed ‘protect water quality and water resources’ as the number one action item… yet our wetlands and open space continue to face death by a thousand cuts from development without planning.” GOSA continues to work cooperatively with developers (e.g. Groton High Point and Great Brook Preserve) to ensure environmentally sound development practices such as reduced impervious surfaces. In pursuit of local, state, and national goals for smart growth, we have consulted with biologists, engineers, archeologists, lawyers and other experts. GOSA successfully opposed a plan to build a Super Wal-Mart close to Groton Utilities’ terminal reservoir. 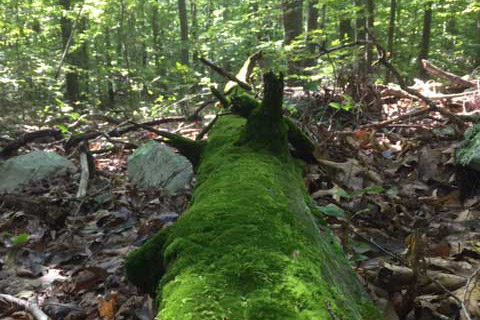 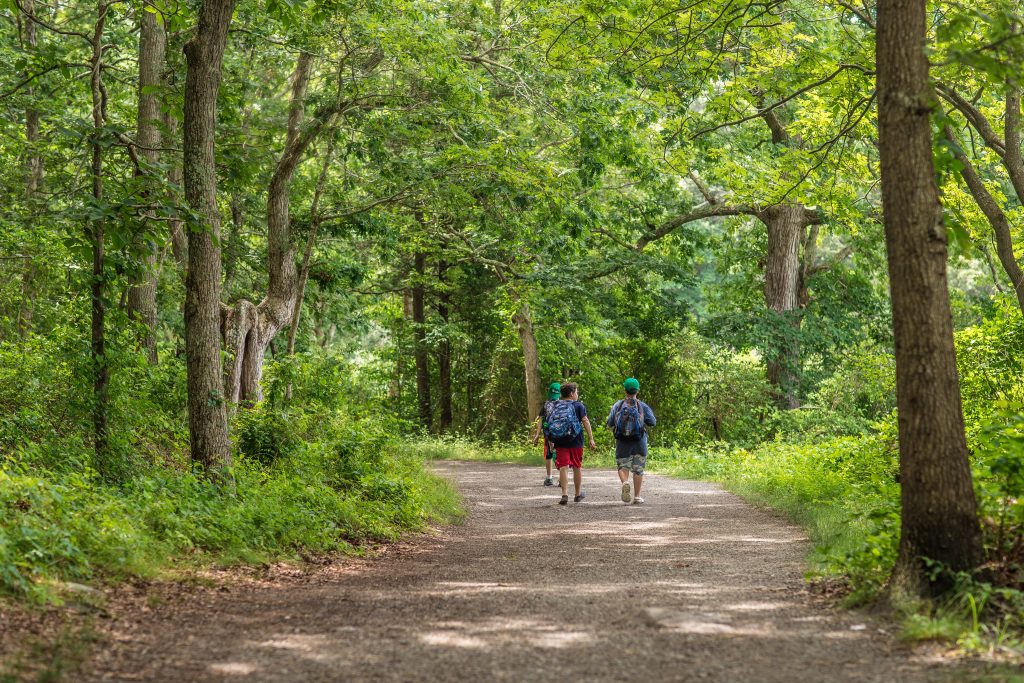 The Merritt Family Forest provided the long-awaited missing link needed to create a greenway connecting two state parks on the west side of Groton to town- and conservancy-protected land on the east side. GOSA, Avalonia Land Conservancy and Groton’s Parks and Recreation Commission worked together to first plan and then blaze the trails needed to complete a X-Town Trail. This five-to-six-mile walk on public trails begins at the Poquonnock River on the west and continues through Haley Farm and across Rte. 215 to the town-owned Mortimer Wright Preserve.  From there, the walk passes through the GOSA’s Merritt Family Forest and on to town-owned Beebe Pond Park, through Avalonia Land Conservancy’s Moore Woodlands, and ends at “Town’s End” at Beebe Cove. 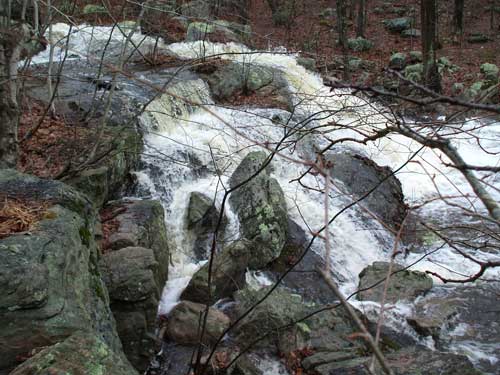 The 63-acre, 18th-century Sheep Farm on Hazelnut Hill Road features a grist mill dam over Fort Hill Brook, one of Groton’s highest waterfalls, and a string of vernal pools. 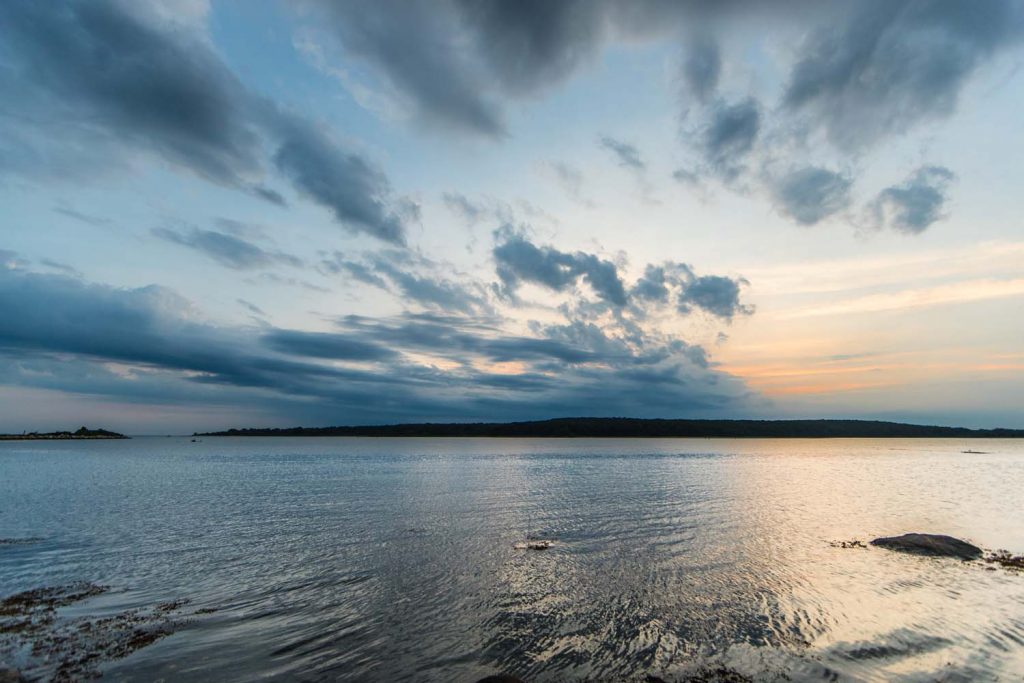 Awarded to GOSA by the Connecticut Land Conservation Council  for “Outstanding Land Acquisition Effort” and for its protection and restoration efforts of the historic Sheep Farm in Groton, CT. 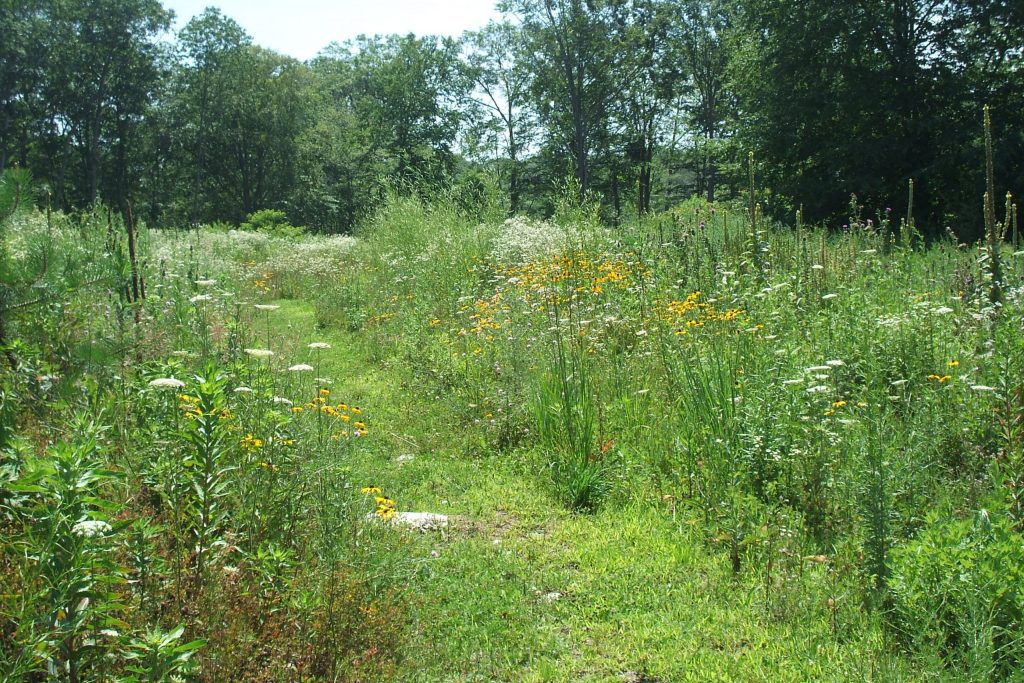 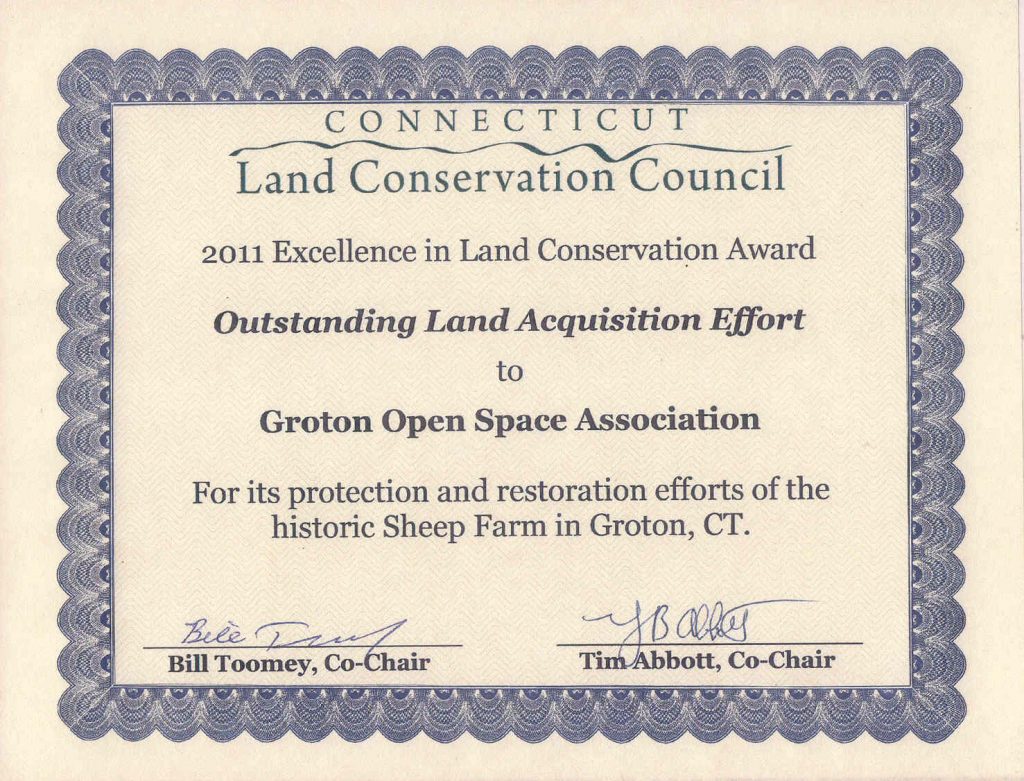 On March 15, the Connecticut Land Conservation Council awarded the 2014 “Katchen Coley Award for Excellence in Conservation” to Sidney Van Zandt, founder and currently Vice President of the Groton Open Space Association, Inc., for her decades of outstanding service to the conservation movement. That same day United States Senator Richard Blumenthal awarded Sidney with a “Certificate of Special Recognition.” One week later, on her 80th birthday, Senator Andrew Maynard and Representative Elissa Wright presented Sidney with an “Official Citation” on behalf of the Connecticut General Assembly. In this document Sidney was recognized and lauded…

“For the more than 40 years you have fought to preserve the scenic beauty of our natural surroundings and defend their ecological integrity. As a result, hundreds of acres of unspoiled land are now under public ownership or enjoy conservation status as a permanent legacy for the people of Connecticut. We commend you for your vital contributions to the protection and appreciation of our irreplaceable natural heritage.” 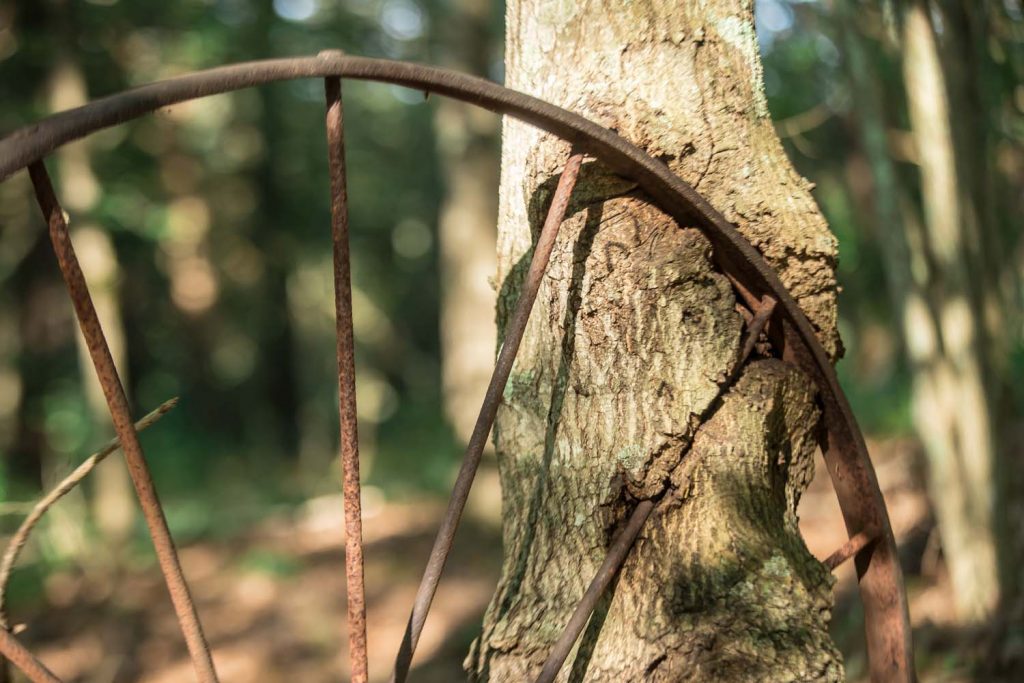 In December, 2013,  GOSA signed a “purchase, sale and donation” agreement with the Weber family, owners of Avery Farm, to acquire their 305-acre historic farm, “…one of the most biologically diverse and valuable sites for conservation in eastern Connecticut,” according to Dr. Robert Askins, Katherine Blunt Professor of Biology at Connecticut College. After two years of fundraising, GOSA aquired the property on December 29, 2015. The land is especially important for migratory waterfowl and turtle populations. Avery Farm features marsh, fields, hedgerows, forested wetlands, historic foundations and a rocky ridge. 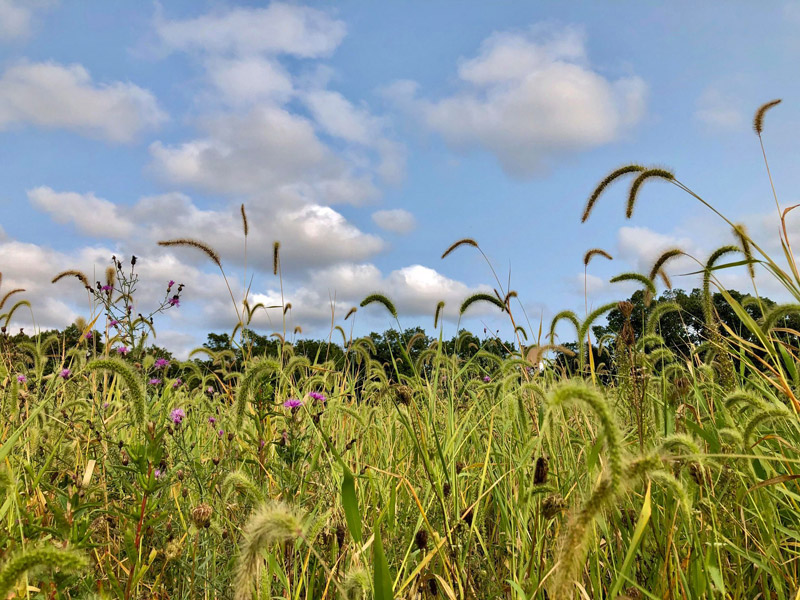 The LTA recognized that GOSA’s accomplishments are shared with your financial and volunteer support, and with our group’s collaborations with local, state, and national organizations. Thank you for supporting GOSA! 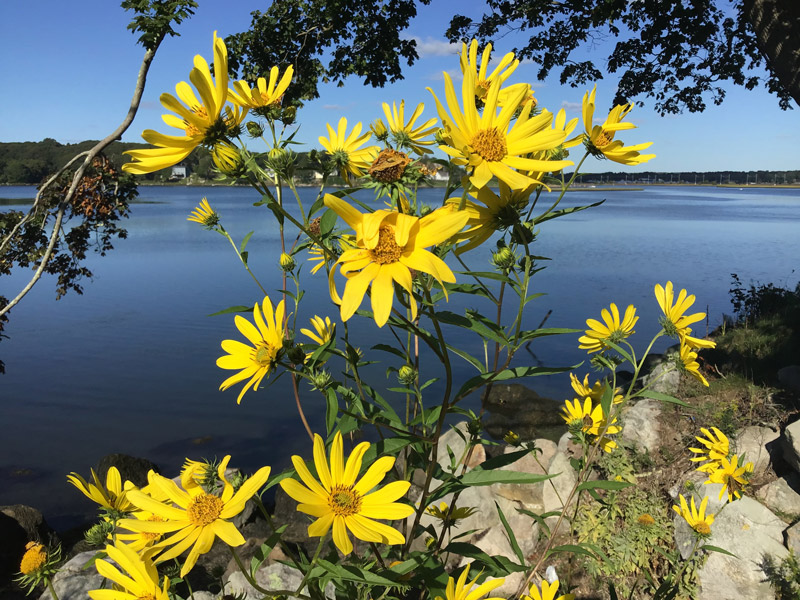 Donated by the Frederic and Robert Anderson Families in September 2017, Beebe Cove Vista offers scenic views of Beebe Cove from a half acre of land composed of four small parcels along the shoreline on the east side of Elm Street in Noank. Though two parcels along the stretch are privately owned, there is access to these grassy areas from the sidewalk. A small marsh hosts great egrets and other wading birds, while diving and dabbling ducks and migratory waterfowl can be seen offshore. The property is contiguous to Avalonia Land Conservancy’s 3.5 acres Anderson Marsh on the west side of Elm Street (Route 215) and just north of the Brook Street intersection in Noank. 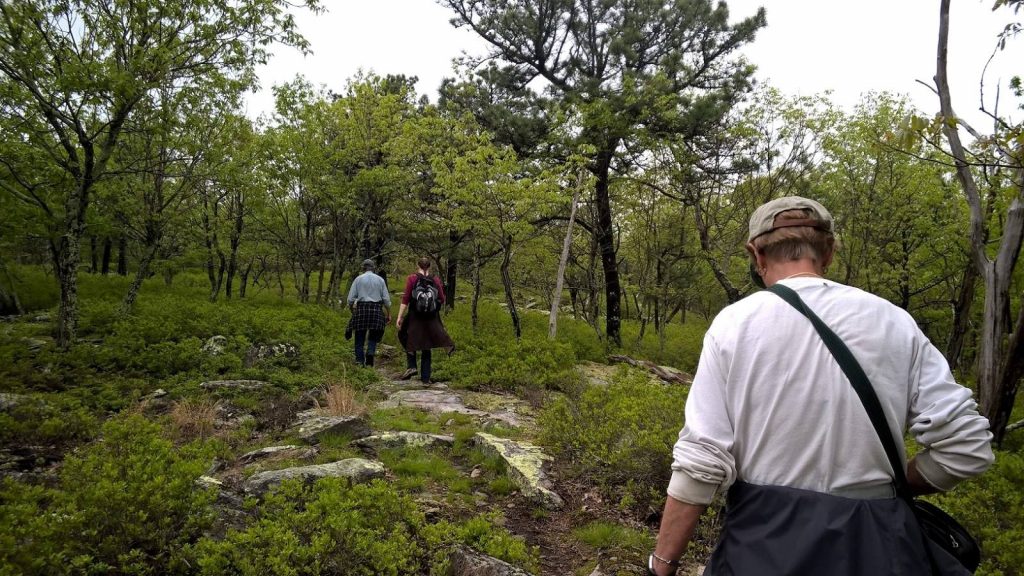 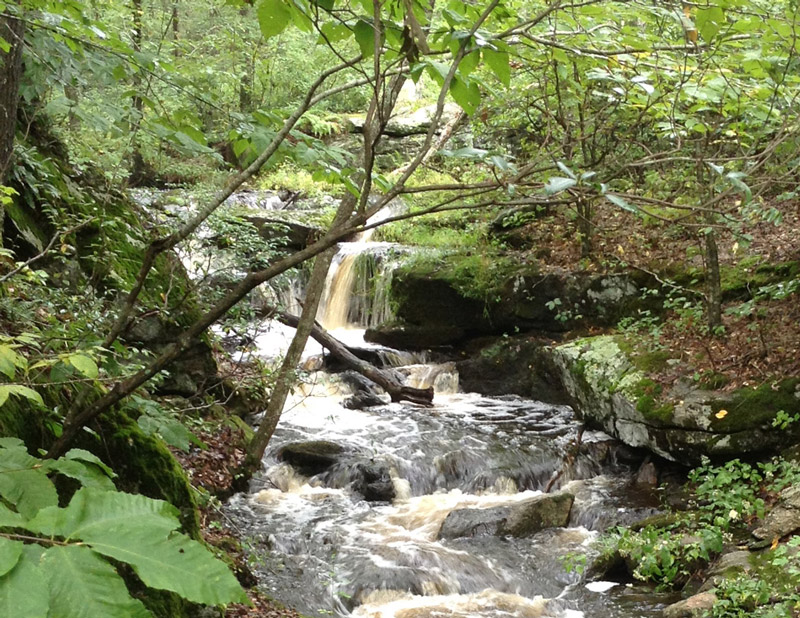 Sheep Farm South is located within a densely populated area in central Groton, close to schools, bus routes and other services, this property abuts, and will extend, the special wildlife habitats, scenic trails, and stream corridors of GOSA’s existing 63-acre Sheep Farm property. 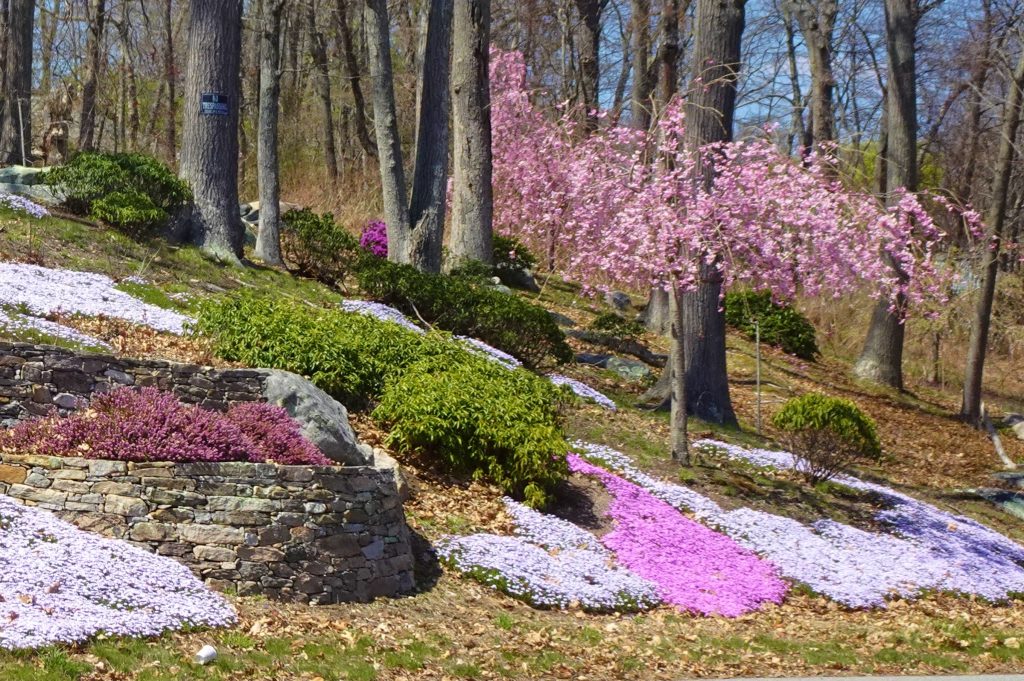 The purchase of Walt’s Walls & Woods, a 5.7-acre parcel located at 0 Drozdyk Drive, on July 30th was facilitated by a generous donation from an anonymous a longtime member and supporter of GOSA. Walter Watrous built the signature stone walls and gardens over many years featuring spring-blooming weeping cherry trees, rhododendrons, azaleas, creeping phlox, heathers, and purple coneflowers. This property serves to protect Baker Cove watershed, a waterway impaired by bacterial contamination, and is surrounded by town-owned open space on two sides and protected wetlands on three sides. Boundary markers, signage, and trails to come hopefully making this stunning property a place of rest and respite for those living and working in the area. We hope you come to appreciate the beauty this property has to offer and love it as much we do! 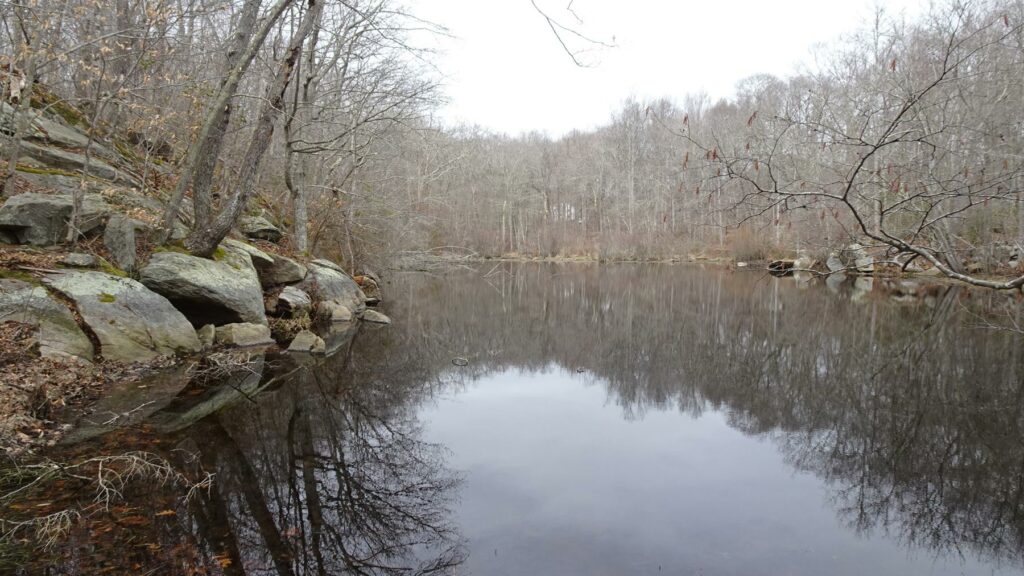 The Town of Groton reached out to GOSA over the past year to financially contribute in support of the purchase the Wolfebrook property off of Noank Ledyard Rd. in Mystic. GOSA agreed to help fund the project and partner on developing plans for potential uses and management of the 161-acre property. Protecting Eccleston Brook and surrounding wetlands along with neighboring forests and wildlife made the decision to support this effort an easy one. We are thrilled to partner with the Town of Groton and invest in a project that affords many benefits for our local environment and community.