As an important part of its mission, GOSA has informed the public about the value of open space, conservation, and environmental preservation. To be effective, GOSA has developed relationships with federal, state and local agencies to learn best standards and practices about environmental management. Board members attend conferences , training, and informational sessions sponsored by organizations such as the Land Trust Alliance, USDA Natural Resource Conservation Service, Connecticut Land Conservation Council, Eastern Connecticut Conservation District, University of Connecticut Extension Service, and Denison Pequotsepos Nature Center.

GOSA has developed relationships with other organizations with GOSA members and directors participating in many capacities including: 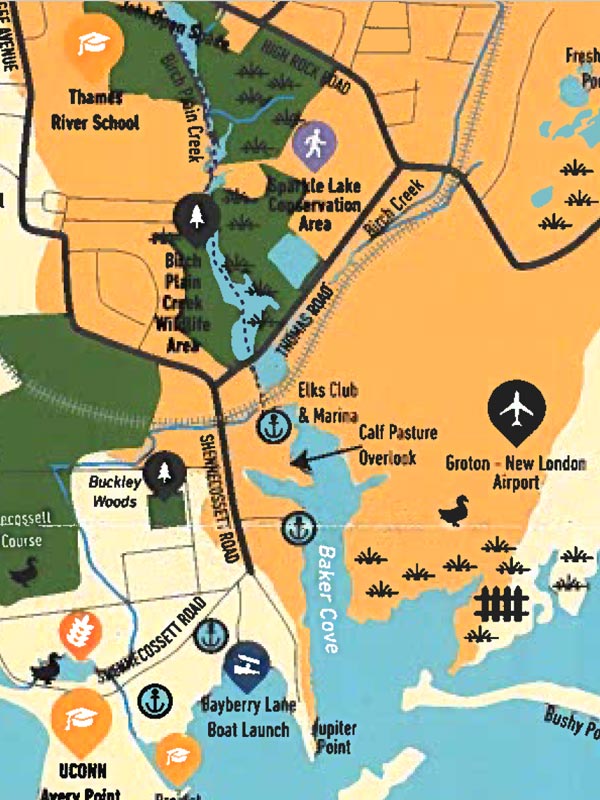 Ways that businesses, places of worship, & community groups can help: MAP and Guide.

GOSA is a member of The Baker Cove Watershed Committee, a volunteer group working to reduce “non-point source” pollution in the waters that drain into Baker Cove, Groton, CT.

A plan by the Town of Groton to re-route sewer outfall from Mumford Cove to the end of Bluff Point.

A 290-unit Active Adult Community proposed for a location north of Route 1 on Fort Hill. GOSA intervened to promote lower impact development, hired a biologist and an engineer to reduce impact on Fort Hill Brook and Mumford Cove and to reduce flooding impact to the Poquonnock Plains neighborhood.

A 34-lot housing development located on Hazelnut Hill Road. GOSA hired a biologist to work with developer’s engineers to come up with a forest preserve plan to reduce the impact on Fort Hill Brook and Mumford Cove.

Result: The Planning Commission imposed a 100 foot naturally vegetated buffer to reduce impacts from nitrogen and other nonpoint pollution.

The Town was actively expanding the land behind the Town Hall Annex for Public Works, Parks and Rec facilities and parking. The plan was to add contaminated road sweepings to the fill. In addition, there was already extensive erosion and contamination to Eccleston Brook and Mortimer Wright Nature Preserve from the open storage of road salt and sand. GOSA asked the Conservation Commission to investigate.

Result: The Conservation Commission recommended elimination of the use of road sweepings, improving the drainage system and constructing a salt shed. The hillside was stabilized, drainage improved, and contaminated sweepings were no longer used.

The Groton Parks and Rec Dept. proposed a logging operation on the Mortimer Wright Nature Preserve in order to pay for the new skateboard park. GOSA asked the Town Council to review the plan which targeted the oldest and largest trees and would not enhance existing wildlife habitat.

Result: The Town Council recommended against the logging plan and found alternative funding for the skateboard park.

A plan for a big box store proposed with drainage into Hempstead Brook, 750 feet away from Groton’s terminal reservoir system. GOSA intervened for alternative location or a lower impact development and hired an engineering expert. Other interveners hired an attorney and a water quality expert.

A plan for 63 housing lots on 125 acres north of Route 184, close to the Great Brook, the main source for the Groton Reservoir system. GOSA hired a soil scientist and biologist and intervened to recommend a lower impact development.

Result: A lower impact plan with fewer homes was designed by the developer and GOSA, granting 5 acres to the Groton Utilities Water Company. Additional buffers were created to protect Great Brook, vernal pools and other wetlands.

GOSA President, Sidney F. Van Zandt and UCONN professor David McKain formed the EEC (Environmental Education Committee) to celebrate the first Earth Day. Events included boat rides from Avery Point to Pine Island with naturalist Robert DeWire. Ashore lectures were given on the environment including the demise of local osprey from DDT and opposition to the Jetport Industrial City proposed for the northeast corner of Connecticut.

Groton’s first recycling project: GOSA worked with Fitch teacher and GOSA Board of Director, Johnny Kelly and students of the Fitch Conservation Club. Barrels were installed at the Annex across from the High School to collect different colored glass for recycling. The project was successful enough to be taken over by the town public works.

An extensive collection of newspaper articles and reference materials is available at the Groton Town Library in the History Room describing the early efforts of GOSA and other environmental advocates.