dirt road loop to the end of the bluff and trails through varied terrain, western end of the X- Town Trail

Bluff Point is the largest undeveloped wooded, coastal peninsula between New York and Cape Cod and is located in Groton. This State Park and Coastal Reserve is made up of over 800 acres surrounded by the Poquonnock River on the west, Mumford Cove on the east, and Fishers Island Sound to the south. A pedestrian bridge over the railroad tracks joins Bluff Point to Haley Farm State Park and is contiguous to the Groton Town-owned land including the Mortimer Wright Nature Preserve and GOSA’s The Merritt Family Forest. Combined, over 1,160 acres of habitat area are available for wildlife and watershed protection. The number of visitors to both Haley Farm and Bluff Point was last estimated in 2012 as 426,000. The payment that year from the state in lieu of taxes (PILOT) funds received from the state for both properties was $326,000. GOSA was involved in the Bluff Point Advisory Council which helped protect this unique site

The land had only three owners before acquisition by the state. It was originally owned by John Winthrop, Connecticut’s first governor, who acquired the land through a grant in 1648. In 1818 the Winthrop’s sold the land to Latham Avery. In 1851 the land was sold to the Gardiner family.

After the land was purchased by the Gardiner family some of the land was leased to individuals and over 200 summer cottages and a pavilion lined the beaches and hillside. The Great New England Hurricane of 1938, also known as the Long Island Express, washed away the pavilion and 106 cottages.

In 1963 the State purchased 246.6 acres at the western portion of Bluff Point from Henry Gardiner. In 1972, GOSA members participated in the Bluff Point Advisory Council (BPAC) which was formed by the CT Legislature to determine the “highest and best use of Bluff Point.”

BPAC was made up of 21 members with co-chair: GOSA president, Sidney F. Van Zandt and GOSA member Omar Allvord. BPAC co-Chair, Sidney Van Zandt was intervenor for many weeks for DEP Hearings opposed to Town officials that wanted the Sewer Outfall construction down the west side of Bluff point into the sound, and promoting a route supported by the State down City Streets into the Thames River that had strong currents and was closed to shellfishing already.

There are several Native American sites on the land. A circa 1700 16 room mansion was built and occupied for over 150 years. The foundation of the mansion, destroyed by fire in 1962, remains visible. In 1904, Bluff Point was the site of the halfway point between New York City and Boston. The Midway Railroad Yards, a complex of 20 miles of tracks capable of accommodating 40 complete freight trains, lay at the foot of Depot Road just before today’s entrance to the Coastal Reserve. Faint cement remains of a 75-foot train turntable can still be seen.

Book published by the New London Day: “Treasures of Southeastern Connecticut: Our Proud History of Preserving Scenic Woodlands, Farms, the shoreline and other ‘Natural’ gems”, by Steve Fagin and Dirk Langeveld, published by “The Day” 2018. GOSA/Haley Farm/Sidney F. Van Zandt were included. See pages 13-15 “Bluff Point: A crown jewel of CT State Parks”. Pages 17, 19, 21, 2 stories by Sidney F. Van Zandt (with her picture) and Amby Burfoot. Page 63 “ The environment vs the economy”. GOSA’s half century of perseverance, about the CHWMA as well as winning the 2017 Nat’l Land Trust Excellence Award for the all volunteer organization.

The Coastal Reserve Act gave Bluff Point State Park the highest possible protection in the State Park system and helped protect the unique shoreline, diverse habitats, and endangered and threatened species found in the park. The Coastal Reserve concept was new to Connecticut and was met with many challenges. Even recreational development would pose negative impacts to the marsh, shoreline, bluffs and river bed. Pier construction, dredging, filling, and other development projects would harm the character and health of the fish and shellfish nurseries, and shoreline and marsh birding habitats found in the reserve. The upland forests would have been vulnerable to fragmentation through the development of roads and buildings. The following are some of the threats proposed:

– 1950-1960’s Plans for filling wetlands to extend the airport runways on the west side of Poquonnock River to allow for landings from NY major airports.

– 1965, The Martin Fine Report: filling the salt marsh area behind the long beach to make way for a 5000 car parking lot, a bathhouse, picnic areas, shelters, campsites and a pavilion.

– Mid 1960s, the state planned a major 50 foot wide east/west highway connecting I-95 to Bluff Point and the airport. Local officials wanted the road to start at the top of Long Hill Road, run behind the central business district, cross Route 1 at Buddington Rd, proceed along South Road to Trumbull Airport, across the Poquonnock River to Bluff Point. The road was to continue behind Fort Hill to the new vocational state school and then to Groton Long Point Road.

– A north/south road from I- 95 to Bluff Point would widen Rt 117 and remove 48 units of Fort Hill Homes was planned. This would meet the Bridge planned by New York State’s Robert Moses from Long Island to Fishers Island to Bluff Point.

– 1973, Stradmore Development Corporation proposed a 400 boat marina and gas station on the 50 acres of the Midway Railroad Yards.

– 1975, consultants for the Town of Groton proposed, at a cost of $1.00, to route a sewer pipeline and outfall to the tip of Bluff Point, threatening shellfish beds, Groton Long Point beaches and irreparable damage to the Bluff Point headland and disruption of replenishment of the saltwater marsh from the eroding drumlin. The DEP sustained its order # 964 to route the outfall to the Thames River following 8 days of hearings in Hartford.

– 1977, The Federal Energy Administration recommended a strategic reserve for underground storage of crude oil. The FEA plan called for removing 660,000 cubic yards of rock in order to develop three subterranean chambers capable of storing three million barrels of no. 4 heating oil. The storage would be 1,075 feet long, 70 feet wide and 95 feet high, all about 150-180 feet underground. There would be a burning flare above ground to burn trapped gases and temporary storage of the 660,000 cubic yards of excavated material on the site.

– 1979, dredging for pontoon boats to access the old town beach next to the airport.

– 1979 an “Amtrak hotel” south of the tracks bordering Bluff Point. Eighteen railroad cars-11 sleepers, two recreation cars, two diners, a commissary, a kitchen, an office, parking, sewage and water systems were proposed as living quarters for construction crews. A 60-foot by 1200 foot stretch of Bluff Point would be used for parking and placement of dumpsters. 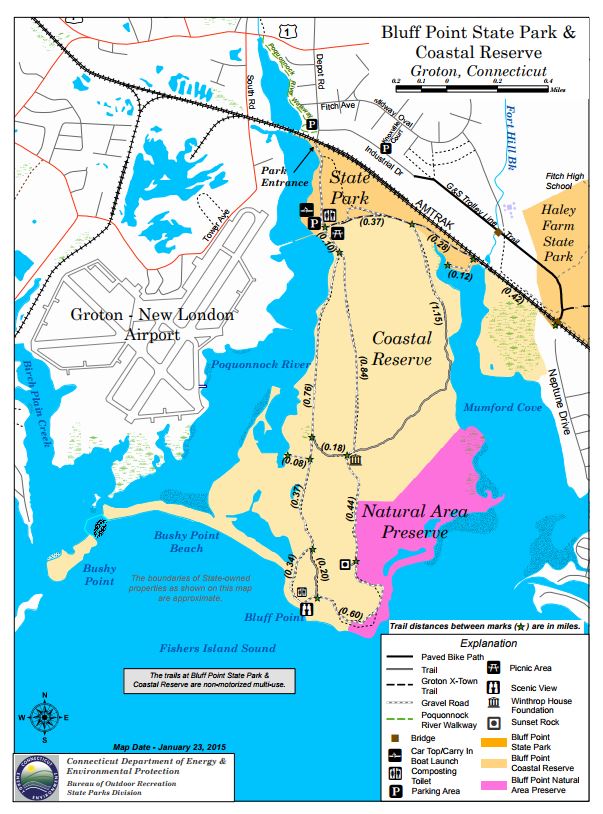