A small graveyard north of the farm building foundations

Race Track Pond, formed when dammed during construction of the railroad – used as a cranberry bog and center of Caleb Haley’s carriage horse racing track.

A tunnel under the railroad track was used as a cow crossing.

Goose Pond was a source of ice carried away by boats in Palmer Cove.

level trails with varied levels of difficulty throughout; miles of mapped trails

This historic 250-acre farm is located in Groton on Palmer Cove. A pedestrian bridge over the railroad tracks joins Bluff Point State Park and Coastal Reserve to Haley Farm and is contiguous to Groton Town-owned land including the Mortimer Wright Nature Preserve and to GOSA’s The Merritt Family Forest. Combined, over 1,160 acres of habitat area are available for wildlife and watershed protection.

In 1649, the land was granted by the town of New London to CT’s first governor John Winthrop, Jr. At some juncture, the land was divided into the Great Farm, Bluff Point, and the Fort Hill Farm.

In 1789, Starr Chester purchased the Fort Hill Farm, which consisted of 570.5 acres. The farm stayed in the Chester family until 1833, when it was transferred to Noyes Barber.

In 1852, the farm, minus the Groton Long Point parcel, was sold to Henry B. Lewis of Westerly.

In 1869, the 400-acre farm was sold to Caleb Haley, a Center Groton native, for $12,000. Haley had been a wealthy merchant at New York’s Fulton Street fish market and ran the farm mostly as a hobby. He was an enthusiast for large, carefully planned stonewalls, and devised a clever stone puller designed by neighbor Francis E. Merritt using pulleys and tongs, driven by oxen and manned by locals when the Noank shipyard was not busy. Two men worked full-time on the project. Some of the baseline boulders weigh three tons.

In 1888 Haley sold land to the railroad and an underpass allowed cows to access grazing lands to the south of the railroad. It remains today and connects Haley Farm to what is now the Mumford Cove Association neighborhood.

Groton Open Space Association began in 1967 as the Save the Haley Farm Committee to protect this special coastal property from development as duplex housing. Sidney Van Zandt and Charles and Priscilla Pratt accepted the challenge to raise the Town’s $50,000 portion. The Connecticut Forest & Park Association and the Connecticut Conservation Association, a forerunner of the Dennison Pequotsepos Nature Center served as nonprofit fiscal sponsors to manage the funds.

Acquired in 1970, the State of Connecticut purchased 200 acres with state funds and $50,000 ($360,000 in today’s dollars) raised by Groton Open Space Association and the local community.

While the State removed aged buildings, the fields were reverting to early successional forest. In 1986 GOSA initiated the field mowing program using funds from the special account at CT Forest and Parks Association.

In 1996 GOSA was reorganized, incorporated in the State of Connecticut and in 1997 received their 501 ( C) (3) tax-exempt status. The special account at CT Forest and Parks Association (CFPA) was transferred to GOSA.

For 32 years GOSA continued to pursue protection of the upper 57 acres and the 12 acres in the “racetrack pond” area next to the railroad tracks. In 2003 the State of CT, using funds from the Recreation and Natural Heritage Trust Program purchased the properties, bringing the total to 267 acres.

The number of visitors to both Haley Farm and Bluff Point was last estimated in 2012 as 426,000. The payment that year from the state in lieu of taxes (PILOT) funds received from the state for both properties was $326,000.

GOSA hosts annual clean-up events to remove invasive plants and storm-damaged trees and has paid three generations of the Crowley family since 1986 to mow the fields. The annual mowing keeps the post-agricultural fields from succeeding into the forest and provides wildlife habitat diversity, a favorite for bird and butterfly watchers. 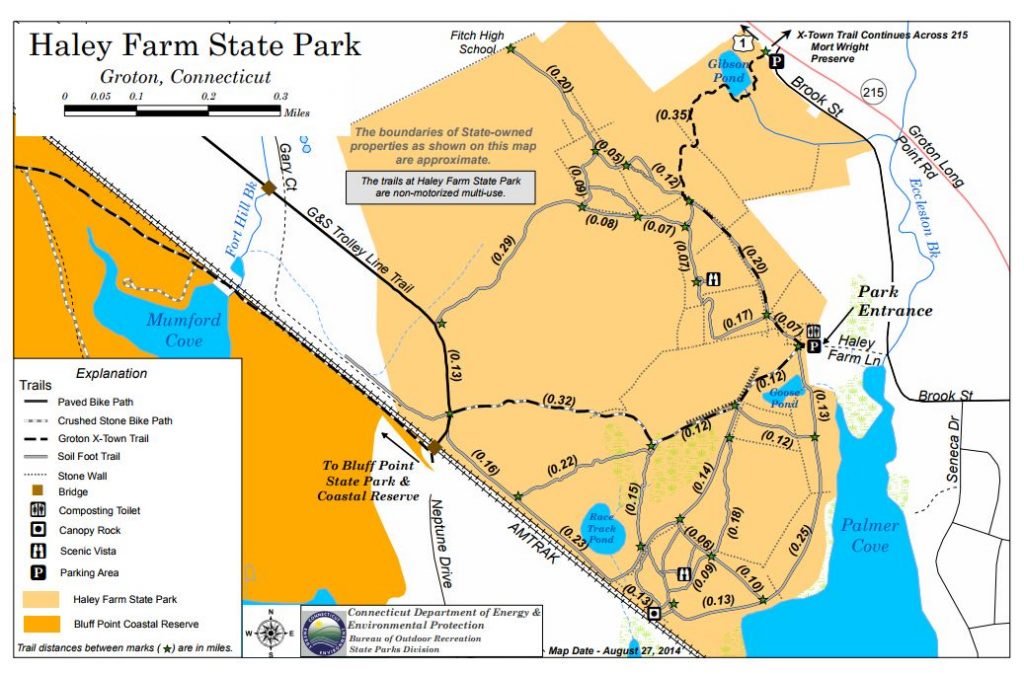